StupidFilter is "an open-source filter software that can detect rampant stupidity in written English."

Too long have we suffered in silence under the tyranny of idiocy. In the beginning, the internet was a place where one could communicate intelligently with similarly erudite people. Then, Eternal September hit and we were lost in the noise.

I hope it has a "neocon" setting.

Tagged: LyX, LaTeX, and TeX, Note to Self

LaTeX Documentation
The (Not So) Short Introduction to LaTeX2e

TeX Documentation
A Gentle Introduction to TeX
TeX for the Impatient

Since it's so damn hot out.

Juice the lemons, with pulp is fine, or strained.

In a jar or bottle, combine lemon juice, water, and sugar; shake until sugar is dissolved.

Chill in the refrigerator for an hour. Serve over ice. Garnish with lemon slices or mint leaves.

and install on Ubuntu.

Tagged: Linux, Note to Self, Ubuntu

About a month ago I wrote about our next door Ghetto Mamma who sticks her kid out on the fourth-floor walkway in front of the apartments, treating it like her personal playpen, rather than take the kid down to the playground in front of the building where she'd have to actually be present and supervise.

On Friday, I was sitting in the living room, windows toward the walkway closed, and all of a sudden the most horrific screaming and shrieking started, accompanied shortly by whacking and banging sounds.

It sounded like someone was beating Junior to death on the walkway. Or like the big bicycle that they park next to the door had fallen over on him, and he was trapped and trying to get out from underneath.

So, being a conscientious neighbor--more conscientious than the mother, since she didn't make an appearance (or Ghetto Daddy, either)--I go to see what was happening.

What's happening was that Junior had realized that the big glass door to the interior is...

That is a keffiyeh... 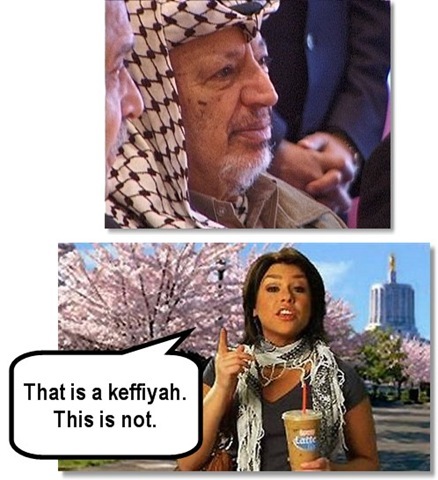 Rachael Ray, fluffy food show host best known for her devotion to Italian-style comfort cooking and her obsession with EVOO, has been thoroughly lambasted by loony-tunes neocon pundit Michelle Malkin, who is best known for not being as Aryan as Anne Coulter, for supporting terrorism.

"What did she do?" You might ask. "Buy an over-priced SUV that needs lots and lots of Saudi oil? Siphon off funds from $40 a Day with Rachael Ray and funnel it to Al Qaeda? Publishing hate-filled screeds on the internet? Teach us all how to make falafel and couscous in under 30 minutes?"

"Rachael Ray wore a paisley scarf in a...